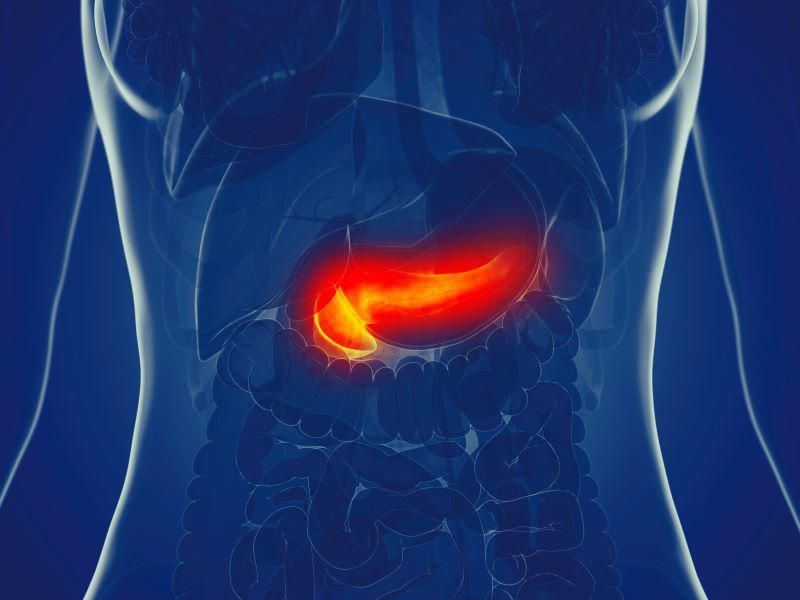 A diagnosis of pancreatic cancer may feel like a death sentence because this fast-moving disease is often discovered at a later stage, when it's harder to treat.

Patients diagnosed with PDAC were six times more likely to have had gallstones sometime within the year before they were diagnosed than patients without cancer, the researchers found.

"I think that what I really hope people take away from it is that patients need good follow-up care," said study author Dr. Marianna Papageorge, a research fellow at Boston Medical Center. "And that's all patients, obviously, but especially for patients that are presenting with gallstone disease or have their gallbladder removed. These patients need to make sure that they're seeing someone afterwards, their primary care physician, their surgeon, whoever it is, so that if another symptom pops up, they can be addressed in a timely manner."

The study also found that patients who had gallstone disease and pancreatic cancer were more likely to be diagnosed at earlier stages and also more likely to receive curative surgery, Papageorge noted.

In the study, researchers used records from 2008 to 2015 in a Medicare database, finding 18,700 PDAC patients and comparing them to an average of nearly 100,000 patients per year.

The team found that 4.7% of those with PDAC had received a diagnosis of gallstone disease in the year before their cancer diagnosis. About 1.6% had their gallbladders removed.

By comparison, in those without a cancer diagnosis, only 0.8% had a gallstone diagnosis and 0.3% had their gallbladders removed.

"We weren't able to determine causal interactions, but one hypothesis is that it causes inflammation in the area of the pancreas, so this chronic irritation inflammation that also that might ultimately be leading to dysplasia and then ultimately carcinoma," Papageorge explained.

Anything doctors can do to diagnose people with PDAC earlier could help save lives.

No screening program for pancreatic cancer currently exists in the United States, she added.

What future screening might look like is recommending that someone who had gallstones and other risk factors get an endoscopic ultrasound, Papageorge said.

The researchers aren't saying that gallstone disease causes pancreatic cancer; only a small percentage of people have both.

Future research might include understanding how these patients with pancreatic cancer were ultimately diagnosed, and can that be replicated in others, Papageorge said.

The findings are scheduled for presentation May 23 at Digestive Disease Week in San Diego, an annual meeting of physicians, researchers and academics in the fields of gastroenterology, hepatology, endoscopy and gastrointestinal surgery. Findings presented at medical meetings should be considered preliminary until published in a peer-reviewed journal.

Dr. Philip Hart, a clinical associate professor of internal medicine at Ohio State University, called pancreatic cancer a huge problem because of the poor overall survival rates and the late diagnosis that makes it difficult to treat.

"I think all of us in the pancreas community are really keen on trying to identify what happens prior to the diagnosis, and what sort of opportunities there may be for an earlier diagnosis," Hart said.


Only about 10% to 20% of people who are diagnosed with pancreatic cancer receive that diagnosis when it's still localized and can be potentially cured with surgery, he added.

Even with progress in treatments for pancreatic cancer, they're not universally effective, Hart noted.


"I think that this is such a huge clinical need that any progress is progress," Hart said. "I think this study opens a number of good questions in trying to understand and drill down a little bit further to understand what is this association about that these authors have seen?"

In addition to more research on the connection, Hart said he would like to see additional research in two other areas.


That could be a population who gets diagnostic screening for pancreatic cancer, he suggested.

Another category is people who have a genetic predisposition for pancreatic cancer but may not know it.


"There's a lot of interest and progress that's being made in that area to, number one, identify those patients who are at higher risk so that they know about it, but then number two, trying to approach them and offer screening from a testing standpoint so that if they do develop cancer, that can be done prior to the development of symptoms," Hart said.

The American Cancer Society has more on pancreatic cancer.